A number of private development proposals are currently pending in the vicinity of Shaw Road and East Pioneer, both within and immediately outside of the city of Puyallup’s corporate limits.
Of particular interest to those who live in Puyallup is the proposed development of an approximately 162-acre site which, although outside of Puyallup’s city limits, is within its Urban Growth Area (UGA). According to the State’s Growth Management Act, property located within a jurisdiction’s UGA is anticipated to someday be annexed into that jurisdiction. This proposal, for development of a warehouse/industrial park complex comprising approximately 2.6 million square feet, is sited in the vicinity of 6719 134th  Avenue East. This project was undergoing permit review in unincorporated Pierce County. SEE BELOW FOR IMPORTANT UPDATES. 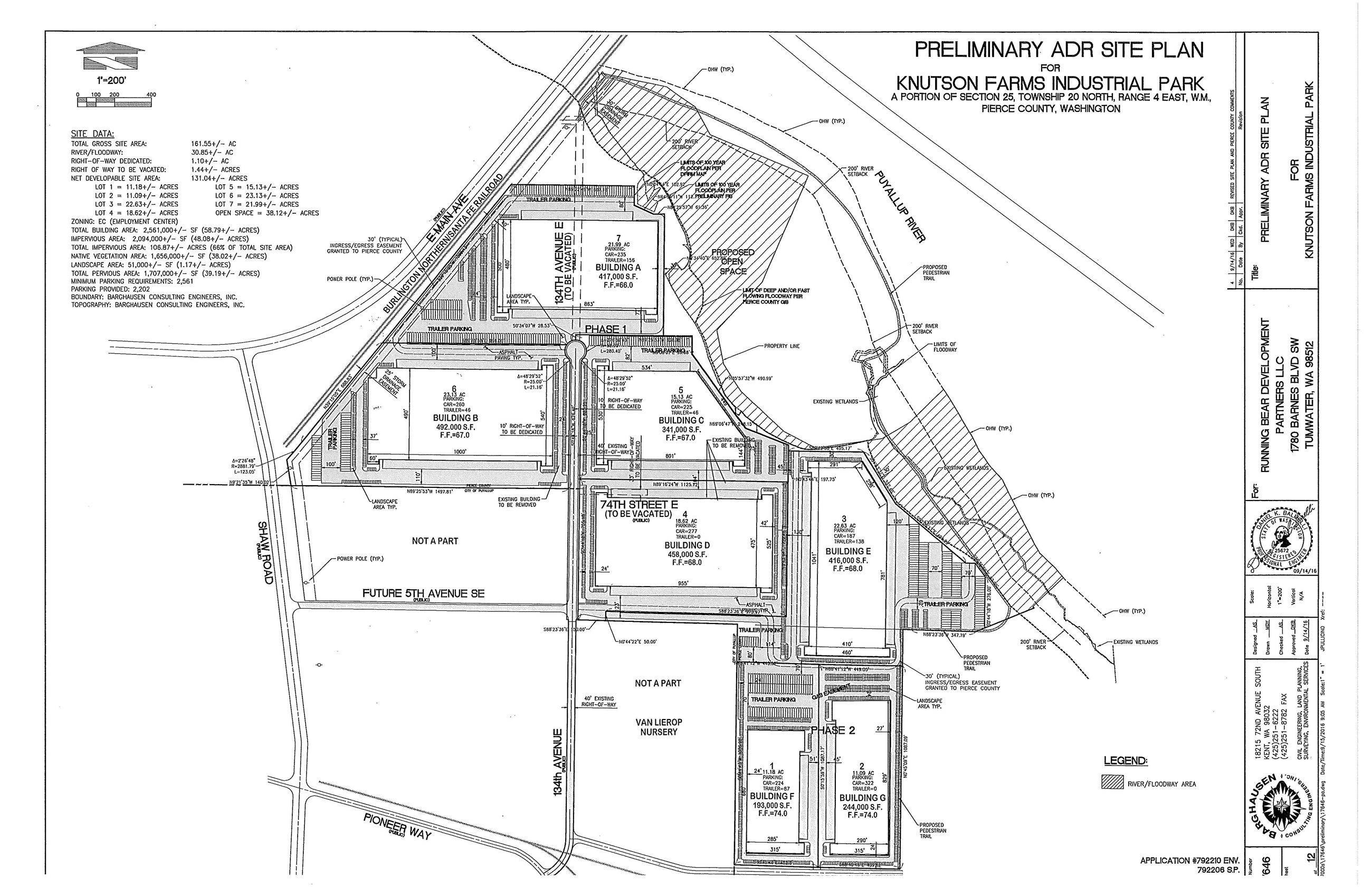 The City has begun formal work on the Knutson Farms Environmental Impact Statement (EIS) and is securing a qualified consultant to prepare that document, consistent with state law. Also, an updated Request for Comments on the Scope of the pending EIS, is expected to be issued soon.

Key documents summarizing the proposed project and environmental review issues are linked on the right-hand side of this page.

The Court of Appeals issued its decision in this case. The decision was unanimous. In summary, the Court found that:

“We hold that under the plain meaning of the applicable regulations, (1) the City is an “agency with jurisdiction” that can assume lead agency status under WAC 197-11-948 and (2) as an “agency with jurisdiction” it may assume lead agency status following the issuance of an MDNS. In reaching our decision, we do not consider legal opinions contained in a declaration. Accordingly, we reverse.”

According to the Court, then, while previously Pierce County was the lead agency for this proposed development, the City of Puyallup has now been declared to be an agency with jurisdiction which may assume lead agency status.


On November 21st, the Pierce County Hearing Examiner issued his decisions on the City’s appeals of Pierce County’s approval of the Knutson Farms warehouse development plan.  The project involves construction of approximately 2.6 million square feet of industrial warehouse buildings in the vicinity of Shaw Road and East Pioneer, on a site immediately adjacent to the Puyallup River. It would generate 1750 heavy truck trips per day.

The City had appealed the County decisions to the Hearing Examiner because the County approved the development without preparation of a full State Environmental Policy Act (SEPA) environmental impact statement (EIS) and without sufficient mitigation for its enormous impacts. The Hearing Examiner decisions culminated a process that included a two-week trial in July 2018 and extensive briefing by the parties over the following months.   The November 21 Hearing Examiner decisions allow the project to proceed, still without an EIS, but with additional conditions.

For example, Pierce County’s original decision required the Knutson development to contribute to planned improvements to the SR-410/East Main/Traffic Avenue interchange but did not require that the improvements actually be in place for the project to go into operation. In contrast, the Hearing Examiner decided that  the improvements, which have not yet been fully funded, must be completed before any project development can be occupied because “… the City has shown by clear and convincing evidence … that allowing traffic from the Knutson project to impact the SR-410 interchange with Traffic Avenue and East Main Street will create significant, adverse, environmental impacts that cannot be mitigated except by the construction of the SR-410 interchange project.”

The Hearing Examiner further held that the County was “…clearly erroneous in not requiring completion of the SR-410 interchange project prior to issuance of occupancy permits” [because] “Knutson traffic would add to already severely congested intersections with long queues that would extend into the downtown area of Sumner and to the intersection of East Main and Shaw Road and beyond in Puyallup.”

With respect to environmental impacts, particularly on wetlands, the Hearing Examiner effectively agreed with the City that wetland D is a regulated wetland requiring a buffer and that “... additional investigation must occur regarding Wetland D prior to commencement of site development work…”

The Hearing Examiner also imposed further requirements on conditions related to traffic including one calling for the applicant to “prohibit the use of Shaw Road south of Pioneer Way East as a truck route.” He also responded to concerns about high intensity uses of the site by requiring applicant disclosures to verify estimated traffic generated by the project: “The applicant shall provide … the names of initial tenants, the square footage leased, and the uses of the leased premises.”  The applicant must provide this information to the County semi-annually on an ongoing basis, with the information to be shared with the City of Puyallup.

Puyallup City Manager Kevin Yamamoto commented in regard to the Hearing Examiner decisions:

“The Knutson project is being reviewed and permitted by Pierce County even though the site is in the City of Puyallup’s Urban Growth Area. The result is that the County benefits from the project, but its impacts and burdens will fall heavily on the City of Puyallup.  The City is therefore pleased that the Pierce County Hearing Examiner decisions recognize that there are significant shortcomings in the County’s approvals. The City is now studying whether the changes ordered by the Pierce County Hearing Examiner are sufficient responses to the issues raised by the City and the public at large.”

If the City decides that it is in the public interest to do so, the next step in the process would be an appeal of the Pierce County Hearing Examiner decisions to superior court.

The City also has pending in the Washington Court of Appeals a challenge to the County’s refusal to recognize the City as “SEPA lead agency” for the project, with authority to direct environmental review and to ensure it is performed by qualified, unbiased experts. That appeal is scheduled to be heard on January 15, 2019. Its outcome could effectively void the Pierce County Hearing Examiner’s decisions.

The City of Puyallup has appealed Pierce County's approval of the Knutson industrial park short plat. The Hearing Examiner for Pierce County will accept public comment on this matter on Thursday, July 26th in Tacoma.

Given the County’s continued refusal to accept the City’s assumption of SEPA lead agency status, the City of Puyallup filed a declaratory action on Friday, May 30th in Thurston County Superior Court. The action requests injunctive relief and a writ of prohibition to resolve the incompatible determinations.

The City of Puyallup has issued a Notice of Assumption of Lead Agency Status and associated Determination of Significance (DS) for this project. As noted therein and consistent with applicable statutes, the City is inviting comments as to the scope of an Environmental Impact Statement for this project within 21 days of this determination, or by 5:00 PM on Wednesday, May 31, 2017. Comments may be submitted as follows:

Any agency or person may appeal this Determination of Significance by filing a written appeal, pursuant to Puyallup Municipal Code Sec. 21.04.205, within 14 days of this determination, or by 5:00 PM on Wednesday, May 24, 2017. Appeals must be submitted to the Puyallup City Clerk, 333 S. Meridian, Puyallup, WA  98371.

The City of Puyallup has continued to review and provide comment on the applicant's submittals for this development. Although substantial issues and concerns were raised by various commenting agencies and individuals, including a request for an open public process and co-lead review status by the City of Puyallup, Pierce County recently issued its preliminary determination and therein determined that this 2.6 million sf project is not significant.
2016 Information

Pierce County has zoned this site as “Employment Center (EC).” In the recent and distant pasts, the property was utilized for farming. Originally submitted in late 2014, the proposed development underwent little permit action until it was resubmitted to Pierce County earlier this year. The preliminary site plan showed more than 3 million square feet of industrial (i.e. warehouse distribution and freight movement) space in seven separate buildings.

The project assumes the construction of a new 5th Avenue SE road segment off of the Shaw Road overpass and the widening of 134th Avenue East.

The city has commented multiple times on this proposed development, first in December of 2014 and again in October of 2015. In these letters, the city communicated numerous questions and concerns relating to traffic impacts and mitigation, needed utility extensions (water and sewer), floodplain and stormwater management, and the long-anticipated connection of the Riverwalk Trail in this area. The city is additionally interested to determine how the proposed development would affect surrounding properties, including the land which was recently acquired for the future Van Lierop Park.

Additional comment letters were submitted in June of 2016 and July of 2016 by the City's consultant on this matter. The July letter referred to and transmitted, as an attachment, information on possible traffic impacts of the proposed project. In addition, the Muckleshoot Indian Tribe has recommended the development be modified in the interest of protecting salmon habitat and to reduce flooding risks.