Puyallup's largest ever public works project, at a total cost of about $27 million, reached a milestone on April 27, 1999, when sewage was re-routed through the City's newly expanded Water Pollution Control Plant. Flow was transferred from the decommissioned rotating biological contactor (RBC) process to a new state-of-the-art activated sludge facility. 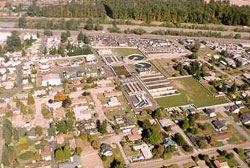 
In the early 90s, the Department of Ecology conducted a several year study focusing on the capacity of the Puyallup River, and its tributaries, to absorb wastewater discharges from its various contributing sources. In 1994, following this study, Ecology issued the City of Puyallup a new operating "permit" containing more stringent requirements for the removal of pollutants. Thereafter, followed nearly 6 years of evaluation, design and construction of this substantial public works project.


Puyallup's facility uses a treatment process whereby a liquid suspension (mixture) of aerobic (oxygen-requiring) bacterial species, collectively referred to as activated sludge, "feed" upon pollutants contained in the sewage. In large tanks (aeration basins) air is bubbled through a diffuser grid to aid the bacterial decomposition of the pollutants. To ensure the right types of bacteria are "selected", special "growth" zones called bioselectors are used.

Ammonia nitrogen is also removed using biological (bacterial) nitrification and denitrification processes. The conversion of ammonia nitrogen - which can be harmful to the river environment - to other nitrogen forms and finally to nitrogen gas (the largest component of air) is also accomplished through the use of specialized microorganisms which proliferate under controlled conditions maintained in the aeration basins.


Although the primary design goal was better treatment, consideration was also given to harmful chemicals used in the treatment process. City staff opted to eliminate these substances wherever safer technology was available. Previously, bacteria remaining in the treated effluent were first disinfected with chlorine, and subsequently de-chlorinated, with sulfur dioxide. Although highly effective and widely used for many years, chlorine is a hazardous element with a significant potential to harm humans, animals and the aquatic environment. Similarly, sulfur dioxide is also hazardous if used or handled improperly. In place of both of these substances, Puyallup now uses ultraviolet light (UV) for disinfection. Momentary contact with UV light destroys bacterial DNA preventing reproduction and leaves no chemical residue in the treated effluent.


Water Pollution Control facilities are often among a municipality's most technically complex operations. The City's experienced operational staff brings a cumulative total of over 50 years of activated sludge experience at 11 different activated sludge treatment plants. The benefits of an experienced and knowledgeable operating staff are both environmental and fiscal: high quality treated effluent protects both human health and the environment while, at the same time, operations and maintenance costs are minimized.


To "protect and enhance the natural environment through a philosophy of stewardship…" is part of the mission statement of Puyallup's facility. True to this objective, the citizens of Puyallup leave for future generations a cleaner river environment and a commitment to the future prosperity of Puyallup.